Sushi to go from Tomoe or take out fried chicken from Hill Country?  Those were our options for the first warm Saturday night in April.   It seemed everyone was out – anxious to celebrate the arrival of spring weather.  And at 8:30pm – prime dining time in NYC – all the restaurants on my list already were booked solid, and every place else was noisy and packed, with an hour plus wait, especially if there was outdoor seating.  We decided to head toward Analogue (my new favorite place for fancy cocktails in the West Village) to ponder our dinner decision over one more drink before heading to the couch.  But like an oasis in the desert, an empty bar appeared on Greenwich with a menu promising $5 drink specials and appetizers that included foie gras!  Fortunately this wasn’t a mirage, it was Saikai Dining Room. 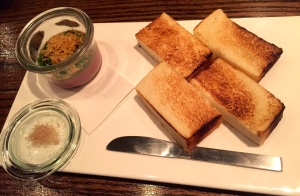 When former Masa chefs, Nick Kim and Jimmy Lau, opened Neta in 2012 and most recently Shuko at the end of last year — the publicity was crazy.  Every critic touted the joys of being able to sample top quality fish at about 1/5 of the price of Masa (albeit still pricey at $135 for a tasting and $175 for kaiseki).  Somehow amid the hype, Chefs Xiao and Wing, also Masa alums, quietly opened their Izakaya, Shuka, and although the name was quickly changed to Saikai Dining Bar (for obvious reasons?), it’s been largely overlooked for the last seven months.  While it doesn’t offer a kaiseki menu, it’s far less expensive than Shuko, and they have a little something for everyone on their eclectic menu.

So it was curious to me that this space was almost empty.  In fact, we were the only people at the bar, and the dining room was less than half full.  Most of the customers were Japanese (often tourists), which made sense after I realized that the only online review was in a blog about Japanese culture in NYC.

Taking two seats around the ample wooden bar, we asked about the advertized drink specials, and were told either Kirin Light or a glass of the house sake.  We went with the sake while we checked out our options on the specially priced bar menu, as well as the regular dining menu.  We started with the foie gras mousse with garlic chips, chives, and toast and the chicken karaage (pronounced: ka-ra-ag-gay) with a huge dollop of truffle sour cream ($6/each on the bar menu).  I didn’t taste much garlic in the foie, but it was a nice portion, especially for the price, and the flavor was enhanced by the salt that accompanied it.  The chicken, which arrived a few moments later, was tender and juicy — the best chicken nuggets you could ever have.  And that truffle sauce was simply delicious!

Since we’d been toying with the idea of getting sushi, we should have tried the sashimi tasting ($28 for the small portion on the dinner menu and $48 for the large), but the bartender didn’t seem excited about the fish (not really sure what was going on with her).  It looked very good, as I noticed when I walked through the dining room where there was no one even sitting at the sushi bar.  Instead, we settled on the Spanish Mackerel Tosazu with nasu (grilled, marinated Japanese eggplant) and slivers of miyoga (Japanese ginger) (also $6 on the bar menu).  This was complex and smoky.  The flavors worked well together, and it reminded us a little of the hay smoked sashimi we had at Sushi Nakazawa.

For something more filling, we went with the grilled uni with udon tossed in uni butter, uni salt and foam ($17 on the regular menu).  The bartender described it as very fishy, as if that would be off-putting for someone that actually liked uni (did I mention she had a strange way of recommending items on the menu?). 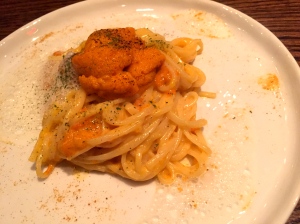 What a great choice it was!  Finally- chefs that can use uni and highlight the taste without destroying the texture.  This was by far the best version of this dish I’ve had-and especially with the ample portion it made me dislike Cosme’s over-priced uni tostada even more.

Since the sake was going down like water, I thought I’d try a glass of wine, but the list was sad, especially for such high quality food.  Stick with one of the many excellent sake choices or try the Ginga Kogen, a Japanese wheat beer that was surprisingly good and in a fun bottle (it also happened to be popular with the Japanese diners).

A far better option than Kirin or Sapporo

I can’t figure out why the NYU students haven’t discovered this place, even if it’s been under the radar of the local foodies.  The bar menu prices are about half the cost of the same item on the regular menu, and the portion sizes don’t seem to reflect the price difference.  While I was tempted to keep this hidden gem a secret, I’m afraid it will close if it doesn’t attract more business, as this food was too good for it to be empty on a Saturday night.  It’s not often that you can find a restaurant that serves outstanding quality sashimi with unique preparations, as well as a mushroom risotto covered in truffles (what I’m trying next).  And at these prices, this place should be on everyone’s list.

For now, I give it Three Forks, only because the service was a little awkward and the wine list is lacking.

NB: No liquor is available here, just beer, wine and lots of great sake and soju choices.  Special bar menu is only available at the bar.