The obvious promotion of celebrity chefs, TV shows and food conglomerates has reached international proportions with festivals from Aspen to Barbados.  Tickets cost upwards of hundreds of dollars, and that doesn’t include plane fare or hotel.  Supposedly a portion goes to charity, but that’s questionable.  Even smaller festivals, which focus on local ingredients and promote less well-known chefs, manage to price out the average consumer.  Some might prefer indulging in an amazing meal with hopefully exceptional service to jockeying for a glimpse of a TV star.  But when a friend suggested we try Saturday’s Grand Tasting at the 2013 NYC Wine and Food Festival for her birthday, I had a good excuse to check out the chaos and was pleasantly surprised.

Robert Irvine filming a TV spot.  Yes, I was starstruck.

Relocated to Piers 92/94 on 55th and the Hudson River, with a ton of other events around the city, it was almost impossible to miss out on attending some part of this extravaganza this year, even if you were trying to avoid it.

Friday’s big draw was the Blue Moon Burger Bash.  Guy Fieri did the local TV circuit to garner publicity for his over-the-top version of a Fat Sandwich, complete with mac ‘n’ cheese on the burger.  Even with all the public support, he tied with Josh Capon of Lure Fishbar’s B&B for the crowd favorite, much to Bobby Flay’s dismay (Flay won the popular vote at a Philly version of this event).  Le Rivage won the judge’s choice award, if anyone cares about what the critics think. 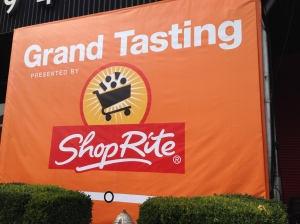 Saturday’s sold out Grand Tasting (12-5pm, demos till 6pm) was presented by none other than Shop Rite, which doesn’t even have a store in Manhattan to my knowledge.  (At least my experience with this supermarket chain has evidenced support for local farmers.)  It was a bit of a cluster at first, with long lines to enter, despite the so-called “Fast Pass” offered for MasterCard purchasers.  Instead of lugging around heavy “goodie” bags, we were told to stop back later, but they ran out.  I went back the next day to pick one up, and it was an entirely different scene.  No line at all and few inside the tents.  Of course, the line-up of chefs/restaurants wasn’t nearly as noteworthy as the previous day, not that you could even manage to get a seat for half the demos/talks on Saturday.  But you could get plenty to drink.

In fact, the drinks seemed to be the major attraction of the festival, with ample booths throughout the space offering everything from lesser known local wines to well-known international brands.

Food, on the other hand, wasn’t always as easy to come by.  There were a fair amount of mediocre product-pushing in connection with the Shop Rite sponsorships (some I had to spit into my napkin).  It was actually surprising how hard it was to locate good food and how early booths were shutting down despite the 5pm end time.  For example, when we tried to go back to the Sea Grill booth around 3pm for more oysters, they were finished.

But the bites I managed to sample were, for the most part, pretty delicious.  And since this is EDA, I’ll start with the eating portion of the event…

The goat cheese gnudi with goat Bolognese from Pescatore was delicious, and one of the first things I tasted.  A key to this marathon of eating and drinking is not to overdo it too early, so I tried to watch my carb intake after that.

La Pulperia offered their Pacu ribs, made famous at the sister restaurant, Quahog’s Seafood Shack in Stone Harbor, NJ, which was featured on DD&D.  I’d been there this summer and just so happened to have a pic on my phone.  So I ended up with my own pic with the chef, Carlos Barroz.  (Sometimes the little things make a big difference.)

Carlos, the fish ribs and that’s an OKish pic of me with the temporarily empty wine glass around my neck for those of you who may be wondering what I look like.

Suite 36 offered a lovely sashimi combo of hamachi and tuna.  I’m always on the lookout for a decent new midtown spot, and this was a pleasant surprise.

Manon offered a decadent hazelnut dessert that was so rich I could only manage one bite.  (Next year, I will bring Tupperware like I saw some others using — obviously experts at getting the most out of this event.)  For an event held during traditional brunch time, dessert options were quite prevalent.  Too filling for my liking, but I prefer savory to sweet anyway.

Another sponsor appeared to be Korea, (yes, the country) with a focus on Korean products and a free chili paste for liking them on FB or filling out a survey on how you learned about Korean food.

Soju Haus, conveniently located near this attraction, might not have had Soju, but they did have pork knuckles.  And a sake station happened to be just down from there.

Spying a martini with blue-cheese stuffed olives at the Little Muenster booth, I had to inquire where to procure one.  After succumbing to a tattoo of a grater,  I was told it was around the corner at the Zyr booth, and managed to have beef cheek grilled cheese before leaving.  And this was a good time for some more carbs…

Note the little grater tattoo that I still can’t seem to get off my forearm.

At Zyr, I had a lovely chat comparing the 100 points it received to the 89 for Chopin, who had a booth on the way in.  Instead of pushing flavored vodka, Chopin decided to offer different ingredients to make the vodka, in what seems to be an attempt to appeal to women drinkers, a recent trend I’ve been noticing.  The traditional potato version was offered next to a wheat (standard for most vodkas, like Kettle One) and a rye version.  I told the Zyr guy to check out the competition, which he quickly did.  (I will agree that Zyr was smoother than Chopin, but I’m a Belvedere or Tito’s girl otherwise.  Although the Tito’s booth was located at a far end of the venue and not very friendly.)

I’ve been working on a piece about bourbon advertising.  So, of course, I had to check out the bourbons.  Four Roses had a large display, offering 3 types: original, small batch and single barrel.  Interestingly, the booth was manned by women. When I got to talking about the history of Four Roses and its advertising, I was told about a new book called Whiskey Women, reflecting on how women have influenced the whiskey production over the years.  (Thursday I am supposed to attend an NYC book party, so stay tuned for a post on that.)  And in case you were wondering, the small batch was my favorite. 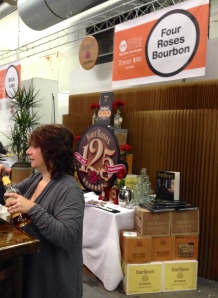 Jim Beam’s booth included a scary bear pushing their Red Stag label.  In further efforts to appeal to women, they had tastings of the maple and honey flavored Jim Beam.  Not so good.  The Devils Cut 90, however, which is made from the bottom of the barrel, was smooth.  And despite all that I consumed, I didn’t end up with a headache the next day, unlike my college days in Tennessee when I would occasionally have the regular version.

In between cocktails, I had some lovely wines from Italy, Spain, France, California and even New York.  The Birthday Cake wines, however, can best be described as drinking sweet metal, somewhat like some of the Pinnacle flavored vodkas.  Please avoid.  In addition to all the liquor and wine, there were beer options, including Blue Moon, one of the sponsors.

With all the food and drinks, we wanted to sit down at some point, but seats were hard to locate.  You could relax in the Hyatt sponsored lounge area, which happened to have a photo booth that no one was utilizing until we did.  (Sorry, but not sharing those pics.)  We almost got into an altercation with some intoxicated women over how we started this trend, but we took the high road and walked away toward the Delta-sponsored JFK airport themed lounge area, which had pulled pork sandwiches from Blue Smoke.  From there, we tried to sit down at one of the demos, but it was packed.

Guy Fieri and friends I think

Somehow my picture taking for EDA declined over the course of the day in favor of funny shots of the crowd, including this woman’s shoes, and of my friends.  (Sorry, not sharing those horrible photos either.) 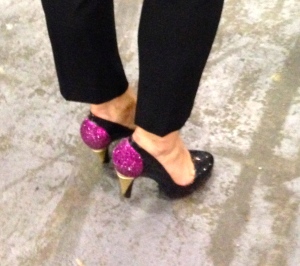 Would you spend 4 hours walking in those?  And yes, she posed for me.

We were looking forward to the promised pedi-planes to deliver attendees back and forth from Columbus Circle to the pier, but they were MIA.  If they did happen to show up 2 hours after the event started, I’m not entirely sure what the point was.  And by that time, finding a bathroom took precedence over public transportation.

A few suggestions to make this event even better:  more good food, more seats and more potties.  But overall, it was an informative and fun festival, much better than I anticipated.  I’m sure that has something to do with my being accompanied by good friends, even if we occasionally lost each other.  And when we did, there was always someone to talk to.  This is not the kind of situation where you should feel awkward going solo.  In fact, I don’t think I’ll need any excuse to attend next year.