That’s what Modernist Cuisine At Home promised.  But my initial experiment with their mac ‘n cheese recipe cannot be described as a scientific success (even if my hungry guests ate it up).  Instead of easily achieving the thick and creamy Velveeta texture, it was a lumpy mess.  Reheating corrected the problem, but I wasn’t satisfied with the end result, or the lack of clarity in the instructions.

My next attempt went much better.  I used manchengo and sharp cheddar.  And I kept the heat constant enough to keep the cheese melted without burning (medium-low on my powerful burner).  The result yielded a consistency where the cheese dripped off the spoon – just like it did in the MCAH display photos! 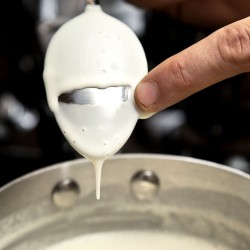 But I prefer a crispy topping, which requires baking.  When I usually make it with milk (and without sodium citrate), it’s thinner but thickens as it bakes.  This results in a creamy sauce.  Not so with the MCAH version.  Maybe I need to try the recipe with milk, but then it will involve more trial and error so that I don’t burn the milk to achieve the right cheese consistency. 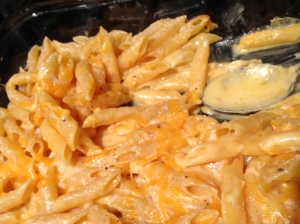 It may be shocking to some, but I can’t say I’m a fan of the sodium citrate version.  It’s lacking in “something” I can’t entirely pinpoint.  Maybe it’s the fact that it looks like Velveeta, which fools my brain into thinking that it tastes, well, like Velveeta.  And Velveeta doesn’t exactly conjure up fond childhood memories.

My mom made giant vats of creamy baked mac ‘n cheese.  The boxed version I’d occasionally have in college might have been creamy for a few moments, but after it cooled slightly, it would dry out and the “cheese” flavoring would disappear.  My mom’s version stayed creamy.  Not that it was healthy.

It begins with a basic roux and a lot of cheese — about a pound of white American cheese.  Nothing fancy.  But after baking and cooling, it’s still super creamy, cheesy and delicious.  But it’s enough to feed 8 people.  Great for parties or a week’s worth of re-heating.

Now when I want baked mac ‘n cheese without all the fuss, I’ll go to Balthazar— their version uses gruyere and lardons.  This is grown up comfort food.

So if you’re looking for the Velveeta version, then by all means use the sodium citrate.  For me, my Mom’s version wins out (but I’ll upgrade the type of cheese and halve the recipe) or else I’ll sneak off to Balthazar for a little indulgence and pair it with a glass of bubbly.  What could be more perfect than that?