Next on the list in my continued effort to make use of my Modernist Cuisine cookbook:  steak.  These recipes seemed to be among the easiest to prepare, requiring only about an hour of cooking time, most of which was hands off.   Plus, the pictures looked amazing.  The meat had an even redness throughout, with a perfectly seared outer layer.

Since I was cooking for two, I initially thought I’d sous vide both steaks.  But when I realized the low-temp oven version took essentially the same amount of time, I opted to make it a battle between the two steak preparations.

Because I believe a good piece of meat should be tender and delicious with minimal seasoning no matter how it’s cooked, I chose two inexpensive strip steaks from the local supermarket instead of the more choice cuts from my favorite butcher.

I’d prepared this cut of meat before and found the one at this market to be tough unless I marinated it.  I thought it would be a good test to see whether the cooking time actually made a difference in the tenderness and flavor of the meat.

The steak cooked for 50 minutes in the water bath at 131 degrees until it reached a core temp of 129 degrees.

In the meantime, after removing the other steak from the freezer, I smeared pork fat on both sides (the recipe called for neutral oil or beef fat, but I happened to have pork fat on hand so I used that instead).  Then I seared it over high heat for one minute per side.

Next I placed the steak in the oven at my lowest setting of 150 degrees with a digital probe inserted to track the temperature of the meat until it reached 133 degrees (about 50 minutes).

When the sous vide steak reached the correct temperature, instead of the recommended neutral frying oil, I seared the steak in butter because I like the flavor and figured it would sear better than the pork fat I used on the other steak. 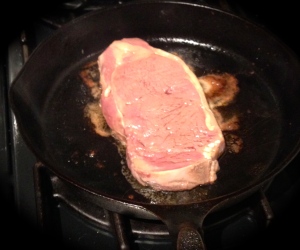 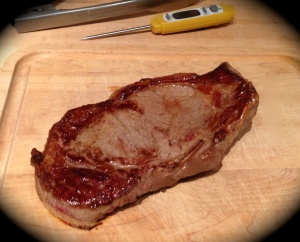 And here’s the oven steak:

Both steaks were perfectly cooked throughout to medium rare. 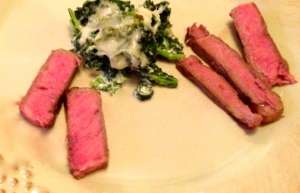 The sous vide version is on the left.

You’ll notice that there are very little juices on the cutting board or plate.  There’s no need to rest the steaks either because they’re cooked at low temperatures.

So which steak won the cooking battle?

The sous vide steak.  It was just slightly more tender and flavorful, and the finishing sear on the steak made it look more appealing than the oven steak that was seared first.  (Note: I would have seared the oven steak a little longer, but I followed the amount of time in the directions.  I’d also use butter next time.)

But the real question is whether the end result was worth the longer cooking time.  And honestly, I’m not sure.  Both were still a little tough, which I’d hoped would be alleviated with the longer cooking time.  The flavor of the steaks was good … but not great.  Maybe that’s because they weren’t seasoned prior to or during cooking, which wasn’t mentioned in the recipe.

A major reason for employing molecular gastronomy techniques is to enhance the natural flavors of the meat.  Another is to ensure that the results of the recipes are the same every time you make them.  Although I was pleased with the cooking methods, I can’t say I prefer the taste of a steak not cooked with salt and pepper, which I think enhances the flavor of the meat as opposed to taking away from it.  So next time, I’ll season my steak and put a dab of butter in the ziploc bag if making it sous vide.  For the low-temp method, I’ll put salt and pepper on my steak and then sear it in butter until it has a nice brownness before finishing it in the oven.  And I’ll probably cook it a little less for a slightly more rare steak.  After all I’m not making the same meals for 100 people night after night, and variation in my dishes is part of the fun for me.

At the end of this battle, I do think both methods have their benefits aside from providing uniformity in temperature and taste.  Clean up and hands on preparation are minimal, which is great after a long day at work.  Who doesn’t want to chill out with a martini while the steak cooks without worrying about burning anything?

So far, I think I’m doing fairly well in my attempts to utilize the principles behind these cooking techniques and incorporate them in a way that make sense for me.  Now to figure out what to try next…