It’s H-O-T and humid here in the Northeast.  And the last thing I want to do is turn on my oven.  Fortunately, I have access to a grill and can do most of my cooking outside under a shady cover of trees.  Though it’s tempting to grill just about everything, trying to grill cilantro, which I seemed to be getting almost every week through my CSA, Cream of the Crop, didn’t seem like such a great idea.  I’d already made a pesto with one bunch.  So I needed to come up with something else.

A look through the vegetable drawer revealed a couple of cukes and a jalapeno that were just starting to get squishy.  Several jars of pickles meant that wasn’t a good option.  So I settled on a soup that would help clear out the fridge enough to make room for the next week’s bunch of vegetables.

You can certainly add cucumbers and cilantro to gazpacho.  But I didn’t have that many tomatoes just yet, and I wanted the cucumbers to be the star.  Searching for recipes online showed a lot of different options.  Most included mint, so I figured the cilantro would be just fine.  And some had yogurt, but I needed to use up sour cream, so I went with that.  Basically, you can use whatever you have on hand to season and get the right texture.  Just make sure that you have enough time to chill the soup (at least 5 hours or preferably overnight).  It makes an elegant first course or nice lunch accompanied by a BLT, which is also a great way to use local lettuce and tomatoes. 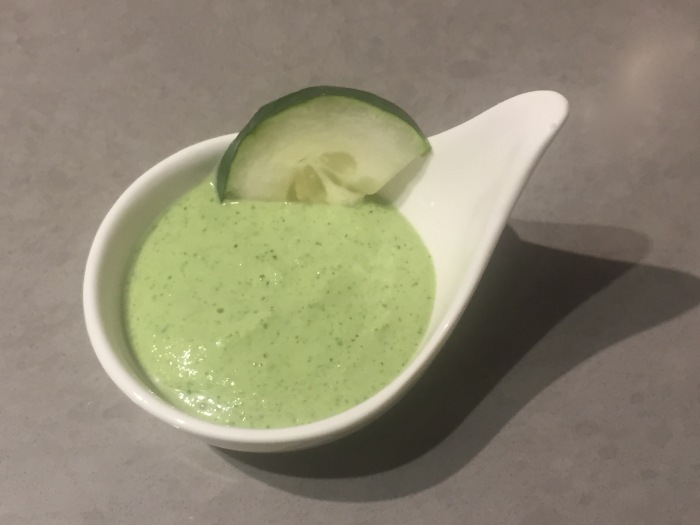 Directions
In a blender or food processor, puree the cucumber in batches.  Then add the cilantro.  Pulse to combine.  Then add the jalapeno (if using) and scallions.  (You can make this spicy or not.)  Puree until mostly smooth.  (I like to cut things up a little before blending because it ensures that nothing gets caught in the blades, but it depends on your machine’s capability.) Add in the sour cream and blend until smooth.  Sprinkle in salt and pepper to taste.  Then chill for several hours or overnight.

Enjoy with a cucumber gin gimlet- which is another good way to use your cukes!

2 thoughts on “Cool As A Cucumber”

Sunset. No filter.
Made it to see and smell the #corpseflower that bloomed @nashvillezoo
If it’s too hot and your #homegrown #tomatoes won’t turn red - make #friedgreentomatoes easily! Pick a big unripe but firm green one. Soak in your #sourdoughstarterdiscard or #buttermilk for a couple hours with some cayenne or old bay added. Then dredge in cornmeal and fry in canola/veg oil for 4-5 mins if fully covered or 3 on each side if not. Cook outside on a grill burner if you want to keep the cleanup and smell out of the house. Top with #pimentocheese or #oldbayremoulade - Enjoy! #cookinginthepandemic
Finally enjoying all of Kyle’s hard work in the garden! #homegrown #corn #butterbeans #peppers and #tomatoes with #shortribs from @barebonesbutcher plus #allthecucumbers
Growing some #organicmushrooms @backtotheroots_official take 2 worked!
#risibisi with #peas fresh from the garden! #grownfromseed
Loading Comments...
Comment
×
%d bloggers like this: