Much has been written about the trendy places to eat in Paris now.  In fact, every other Travel section of the NY Times seems to focus on Paris.  It’s a reciprocal love affair, as I’ve noted in Part 1.

On everyone’s list this summer was Frenchie, from Gregory Marchand, which opened in 2009 and has gained a huge following with lots of press and expansion since then to include a wine bar and “to go” space. “Frenchie” was Marchand’s nickname when he worked in London, and his restaurant is expressly influenced by his time cooking at Gramercy Tavern in NYC.  The menu is supposed to be based on seasonal ingredients with French technique – but as I came to learn during my two weeks in France – finding seasonal, local ingredients is a bit more challenging in Paris than it is in NYC.  More on that below and in posts to come…

The main dining space has only a few tables making it tough to get into, but it wasn’t too much trouble to dine next door at the Bar a Vins, especially if you can do late night (and during the World Cup France match didn’t hurt either).  The wine bar offers many of the same menu items as the restaurant, but the menu isn’t set, so you have the freedom to choose a few small plates if you want.

Of course I had to wait a few minutes for a table, so I had a glass of wine at the candle-lit bar.  The Canadian bartender tried to upsell me a non-French white (I wasn’t having it), while I listened to a bunch of Americans and British people chatting.  I wasn’t even sure anyone French was eating here.

Eventually, I was seated at a high wooden table (most of the dining space is communal) next to two Parisian women, who were having girls night out. (Finally, some locals!)  My view was of the tiny open kitchen where I watched the apprentice chefs in training.  Burrata was on the menu, but turned out to be pre-packaged like anything you’d find at Trader Joe’s.  Burrata, of course, is not a typical French cheese, and was all the rage in NYC over the summer.  Curiously, it is still on the winter menu at Frenchie, as is the warm skate wing salad – pre-cooked, reheated and composed a la minute like fast food – it looked like a pile of unappetizing mess. 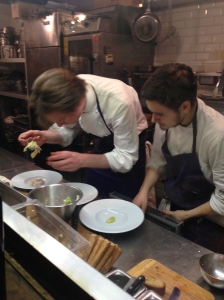 Plating the skate– that’s the white stuff in the bowl on the far left.

The leeks didn’t look much better either, and that’s when I noticed there’s not much of an ability to cook in this space (kind of like Gotham Market where steam tables do a lot of the work).  Appetizers to dessert were all in the same station.

I was torn between the sweetbreads and a veal with white asparagus.  I went with the latter, which was artfully plated with a smoked yolk egg – and can you believe it? It’s still on the menu, as are the sweetbreads. 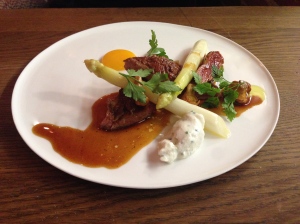 Then I chose a pea tortellini, since that seemed seasonal, and it’s, of course, still on the menu.  (Maybe the online menu hasn’t been updated, but then you have to wonder why not since it’s been 6 months.) 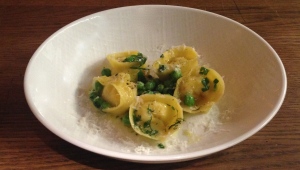 At least it was tasty- not that it blew me away, but it also wasn’t very expensive.

As I waited for my food, I made friends with my tablemates and asked them where else to dine.  They gave me a couple of options that all had the exact same menu and were by the same restaurant group (Glou, JaJa and Beaucoup) and Pamela Popo.  Although none of these make any list of top places to go that I’ve seen, the menus were almost identical to those at Frenchie and others on the “must” lists – which I found very interesting – and they offered very reasonable lunch service.  They also seem to focus on where ingredients are from (Aubrac beef, for example) and not so much on truly seasonal cooking.

I found it very French that my dining table companions went to smoke between the main course and dessert.  That seemed the most French thing about the whole meal other than the lack of water, which is typical of French restaurants.  But it certainly wasn’t the type of seasonal cooking I expected.  And those ingredients weren’t locally sourced, which is the case in much of Paris as Rungis is the market on the outskirts of the city where virtually all the meat, vegetables, fruit and cheese is purveyed.  (I promise to expand on that soon.)

All in all, Frenchie is a nice place for the money, if you don’t want to speak French, but it’s not doing anything better than I can get in NYC.  I suppose if you’re an expat and craving a pastrami sandwich, then Frenchie To Go is the place for you.  Really, what could be more New York than that?  But if you go to Paris for only a short time, don’t feel the need to put this on your must list.  Go someplace that’s cooking dishes you can’t get where you live.  Parisian food is special for a reason, and maybe it should learn to love itself again.

Next up … what’s new with Paris’s wine bars.