I’d been craving fried chicken.  Not the fast food kind.  I wanted a crispy, buttermilk style, but I can’t seem to find what I want in NYC.  So when the critics started raving about Root & Bone, from the former Yardbird chefs and Top Chef alums, Jeff McInnis and Janine Booth, I decided to give it a shot, even if this wasn’t the exact kind of fried chicken that set my mouth watering.

Since we stayed in town this Labor Day weekend when the city is mostly empty except for tourists, it seemed like a good time to give it a try.  On Friday at 8:25pm, we were told an hour and a half wait.  Oh well.  But they take your phone number, so you can go have a drink or two at one of the many places nearby their location on 3rd Street between Avenues A and B.  We returned a few minutes shy of the promised time, and right as they were about to call us.

We were lucky enough to be seated at the counter directly in front of the open kitchen.  From this vantage point, you can watch the chefs pour waffle batter into the irons, whisk the sauce for the mac and cheese before tossing it into the oven to crisp, and assemble the fried chicken and waffle sandwiches.  Any wait was quickly forgotten as our friendly server took our drink order.

McInnis was on the scene, fussing over every detail.  He stopped by to tell us why his chicken is so special (the sweet-tea brine and lemon dust) and that he’s trying to do things a little differently by keeping the restaurant small. (And so we are very clear, he had no idea that I have a food blog.)  [Note: we didn’t see Booth around.]

When the food came, he advised us to dip the biscuits in the sesame seeds and then dip in the chicken jus – which to me tasted of maple syrup, butter and chicken drippings.  It was rich and absolutely delicious.

McInnis also told us that they use the leftover biscuits to form the thyme crust on the creamy mac-n-cheese (and there are only so many orders available per night).

We decided to order the whole bird, so we each could try a wing and a leg.  After all, we’d come to the opposite side of the city for fried chicken, so we could always take some home.  (I LOVE cold, fried chicken.)  It was served with a spicy honey sauce, but it’s juicy and delicious even on its own.  This wasn’t the buttermilk kind I was wanting, but it was pretty great. 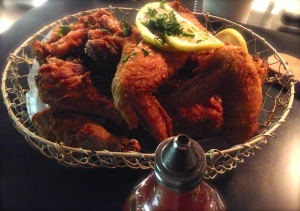 McInnis gave us a complimentary order of waffles topped with cheddar and scallions that I wouldn’t otherwise order again, but they were great when dipped in that chicken jus from the biscuits instead of the accompanying whiskey maple syrup. 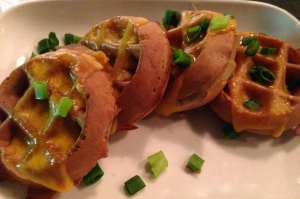 Not only was the food generally good and reasonably priced, but so was the service, even on a busy night.  This is what to me make a good meal great.

A changing paper cocktail list is currently smaller than the one shown online, but you can still choose a glass of bourbon or rye from a decent list.  All wines and beers are American and Aussie (a nod to Booth).  The well-priced rose ($7/glass) by Dr. Konstantin Frank from the Finger Lakes region was very good (I also like their dry Riesling, which I had at the NY/NJ Baykeeper oyster benefit last year).

Although we came for the fried chicken, the attention to detail and overall technique show that Root & Bone surely has more to offer.  I’ll be looking forward to what the future holds for McInnis and Booth — maybe one day an UWS outpost like The Meatball Shop and Parm??  In the meantime, I’ll happily trek down to the LES.  But if I want the buttermilk kind I’d been craving, I think I’ll try making it myself with Tyler Florence’s recipe – unless someone can tell me where to find it in NYC…