Chefs will go to great lengths to use fresh, local ingredients in novel ways.  Chemistry is used to create fancy foams, gelatinous cubes and smoking plates. But not everything needs to be infused to be delicious.  Simple, focused cooking can turn a pepper into a work of art.  That’s what you’ll find at ABC Kitchen.

Now well over two years old, it’s still topping the lists of the best restaurants in NYC and across the country.  “Passionately committed to offering the freshest organic & local ingredients possible,” there are no gimmicks needed.  Some have claimed that the food and service is inconsistent and not deserving of the high praise lobbed on this establishment now that JGV is barely on the scene.  Others declare it superb — even at 10pm on a weeknight.

Since it’s still next to impossible to get a dinner reservation at a decent hour, you might have better luck dining at one of the bar areas.  There’s a large space in the front and a smaller one in the back of the restaurant.  Despite the ample seating, there wasn’t a free chair to be found on a hot and humid Tuesday night.  But I luckily spotted a signed credit card slip and two empty glasses.  Deftly stepping in as the prior guests stood, I scored two seats at the front bar. 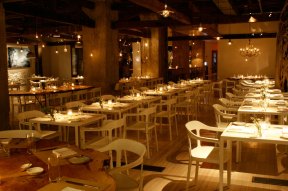 Located next to the ABC Carpet & Home, it’s a casual place with chandeliers providing soft, romantic lighting.  A stark contrast to the frenetic service.  The place was packed.  The bartender and his minions couldn’t handle everyone, and made that very clear.  Having been “in the weeds” before, we patiently told him we’d be ready to order drinks whenever he was free.  He came back several minutes later, and it was no time before we were sipping the Basil Lime Daiquiri (not frozen but the original rum version) and a Sour Cherry Old-Fashioned (delicious!).  As a side note, I was surprised to find that there were no hooks under the bar for bags.  In any case, after the three southern blondes next to us finally ordered and received their drinks, the bartender eventually came back for our food order.  In reality, the timing was not very long but the attitude made it seem longer, even though we were very polite and jovial.  In fairness, it’s always an interesting experience trying to enjoy fine-dining at a bar.  Fortunately, the food more than made up for any service issues.

At first glance, many of the menu items seem standard and not obviously interesting, especially for anyone who has been cooking a ton of veggies lately (like me).  On the market table menu, you’ll find olives, meat and cheeses, and assorted toasts with various spreads to share.  Never one to try the ordinary, I vetoed most of these.

Scallops in the Shell

But since several of the raw fish appetizer options were intriguing, we decided to start with one of those.  Settling on the raw diver scallop crudo with chile, lime and cherries, it was an excellent choice.  The presentation on the scallop shell was lovely.  The freshness of the scallop came through with the hints of spice and citrus nicely complementing the saltiness.  It paired lovely with the old-fashioned.

Next up was roasted okra and shishito peppers.  You don’t often see okra on a menu unless it’s fried and most likely at a BBQ joint.

A Play On Peppers

A stringy and somewhat bitter vegetable, few are fans.  But this thoughtfully prepared dish will change your perception of okra entirely.  We had to look twice to figure out which was the okra and what was the pepper.  Nicely spiced, the okra was cooked perfectly — not at all chewy.  A truly great concept with unusual ingredients.

Then came the entree of suckling pig with bacon jam and baby leeks. Knowing we were sharing, the kitchen separated the dish into two portions (a very nice touch especially when eating at the bar).  The crisp skin was delicious, the bacon perfectly cooked, and the leeks made it all come together in salty, sweet succulence.

Pig In The Wild

These three dishes were plenty for 2 people to share, especially on a hot summer night.  Unfortunately, we didn’t have room for dessert on this visit.

ABC Kitchen lives up to its promise — simple, creative preparation is all you need to let the freshness of the ingredients shine through.

Rating: Three Forks* (4 for the food, minus 1 for service)

One thought on “Easy Eating At ABC Kitchen”