My trip to Vietnam was everything I could have hoped for in a vacation and so much more.  We ate, drank, ate a little more and had some serious adventures over the last two weeks.  I have lots to share with you, so I will be doing several posts in the coming weeks.  For this post, I’m focusing on the national dish of Vietnam – pho.

It’s a rice noodle soup that can come with beef (bo), chicken (ga), pork (thit) or tofu.  Pho is traditionally served for breakfast.  And it’s also served for lunch and dinner. You can eat pho basically anytime.  And the best place to get it – as with most food in Vietnam – is the street.

Street food in Vietnam may come from a little cart on the road, a quickly set up portable burner down an alley, or a doorless storefront that might have a few tables or some tiny plastic chairs in front to attempt to sit on.  Most places make only one dish – whether it’s pho, bahn mi (post to follow on this sandwich) or one of the many other specialties.

The pho is the North (Hanoi) is different from that of the South (Saigon).  In the North, the broth is deeply flavored, and it has only the noodles, protein and scallions.  A lime, chilis and chili sauce are served on the side to add as you want.  In the South, they add bean sprouts, cilantro, Vietnamese mint, and more scallions.  It’s also spicier, with the chilis usually thrown in for you.  As a spice lover, you’d think I would prefer the Southern version.  But to my surprise the fragrant broth of the North really was the essence of the dish, and I was fine adding about 2 chilis and a squeeze of lime for a slight kick. 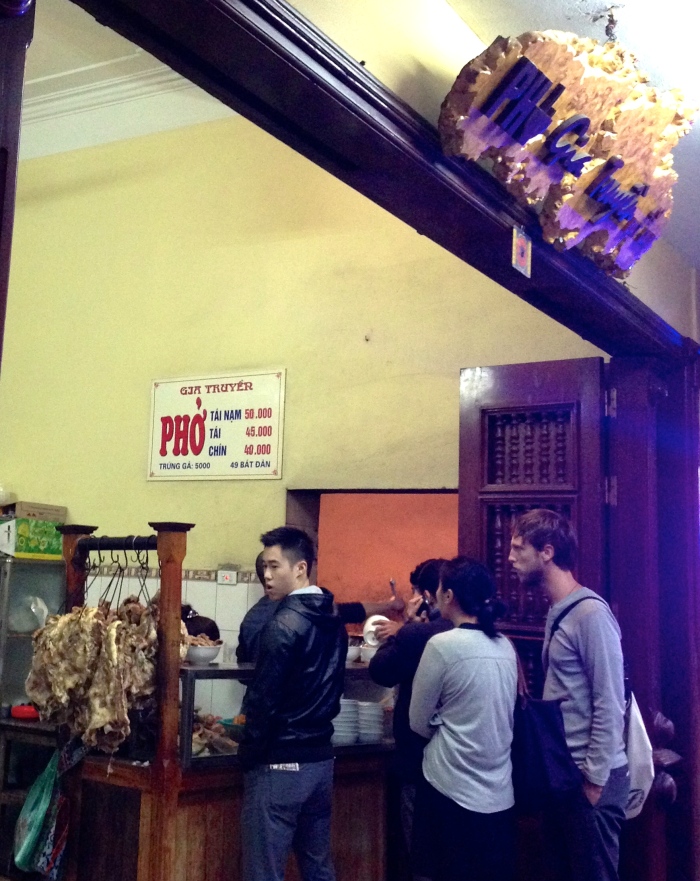 My first stop in Hanoi was for a giant steaming bowl of pho bo at Gia Truyen at 49 Bat Dan.  It is the place most recommended by everyone – although some have found it elusive, claiming it closes early.  We went there for a late lunch/early dinner when we first arrived.  No trouble finding the place in the Old Quarter, and it was open and busy with both locals and tourists. (I found that the opening and closing times in food critic reviews tend to be wrong.)  There were a few tables to sit down and enjoy it.  We got in the line and simply said how many bowls we wanted. Then they pour in broth, add noodles and scallions, sliced the beef, added that to the bowl and then topped it with the brisket as well.

The beef flavor in the broth was so rich and strong.  It was just heart-warming and wonderful, especially on a cool, rainy evening.  At 50,000 VND (about $2.50), it sounds ridiculous to say that it was a little pricey compared to other places.  But by far, the best version of this simple dish. 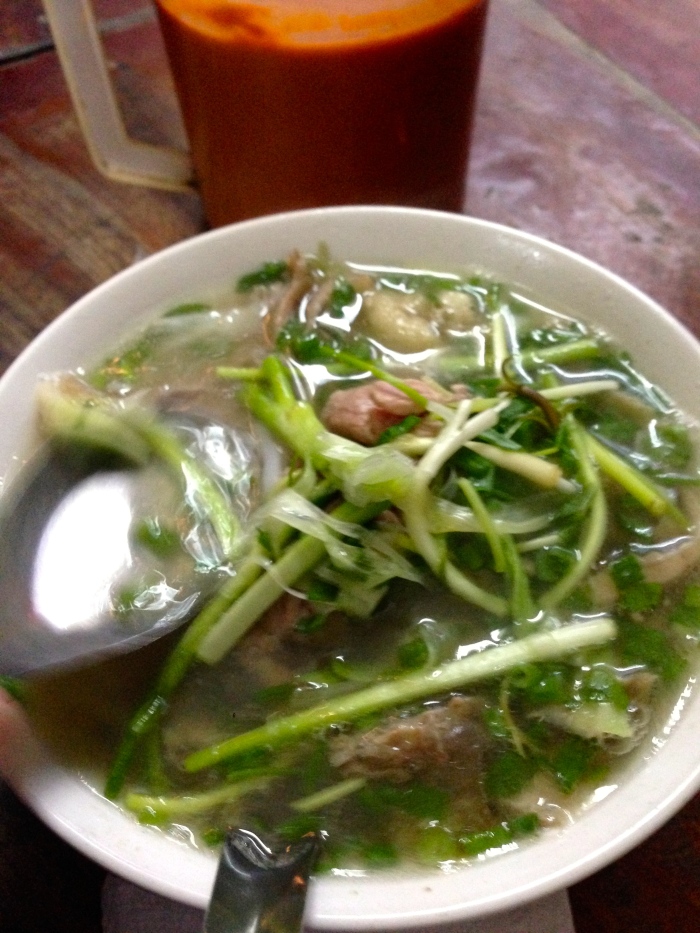 On the other end of the spectrum, after an overnight train back from Sapa, we decided to treat ourselves to pho at the Metropole, one of the oldest and nicest hotels in Hanoi.  This Michelin-starred restaurant had a typical breakfast buffet for hotel guests, but we were able to order the pho bo that is on the normal menu. (The one on the buffet is chicken.)  The real one has the broth made the day before, and you can taste the cinnamon, star anise and cardamom.  Unlike the street version, it attacks your senses more subtly, with the beef complementing the seasoning and not overpowering the broth.  The noodles were definitely better than the street version.  But it was entirely different from our first bowl and equally as good.  I’m still not sure which version I preferred, but I give the first bowl the edge since this one was 215,000 VND.  Our breakfast for 2 with coffee was $40 – about the most we spent on a meal the entire trip.  But the hotel setting is lovely, and it was a good place to freshen up after the train.

Pho Bo at Spices in the Metropole

We had pho several more times throughout the trip, whether for breakfast at various hotels or as a lunch option on some tours.  The pho in Phong Nha was spicy.  In Phu Quoc, it was savory.  Most of these were very good, as you can adjust the seasoning with the herbs and spices, but none compared to what we had in Hanoi.  By the time we got to Saigon, I managed to be pho’ed out and decided to sample the bahn mi instead.  I didn’t think Pho 2000, where Clinton ate seemed particularly compelling, and most agree that you are better off eating pho in Hanoi than in Saigon.  But if you happen to find yourself in Saigon and want a bowl, Pho Le in District 1 is highly recommended by locals and food critics.

I bought a Vietnamese cookbook, so when I get a craving in a few weeks, I can now attempt my own version of this wonderful dish, which I’m happy to eat at any time of day.

One thought on “Hanoi: Pho, Pho and More Pho”

Seriously yum! #oldbay
Rainbows already!
Woke up to this view! #baygardens #stlucia #thisis45
Exploring
Sunset. No filter.
Made it to see and smell the #corpseflower that bloomed @nashvillezoo
Loading Comments...
%d bloggers like this: