Clear turquoise water, yachts, secluded beaches and amazing food.  It’s hard not to fall in love with St. Martin.  Although busier than some other Caribbean islands, you can avoid most of the traffic and cruisegoers if you stay away from the Dutch side and head over to the cheaper and more charming French area.  (Yet another cruise ship was stranded in port while we were there.  I still don’t understand why people cruise!)

Disappointed that LOVE Hotel on the beach in Grand Case was booked, we settled for a sunset drink there instead.

View from the LOVE hotel bar

As luck would have it, Grand Case was suffering from a water shortage problem  — not just hot water, but NO water at all.  And the bar that looked so charming online was filled with smoking French people.  So I was pleased that we ended up staying at Le Domaine du Lonvilliers in Anse Marcel, even if I cannot recommend the hotel for its poor service, stained bed linens, need for cash and lack of food and bar options (not a 4 star by any means).   The location, however, was more tranquil than the strip in Grand Case and not far from the restaurants there.  On a positive note, we loved Rashid, who runs the Ti Snack bar on the beach (cash only) and makes a mean quesadilla.  The only 4 star part of the resort were his infused rums.  His ingredients come from whatever happens to inspire him.  Our favorites were the seagrape, from the nearby tree, a ginger to soothe digestion and the sweet lychee.

This centipede rum at LOVE is supposedly an aphrodisiac (not one of the ones we tried with Rashid).

From the hotel, you can also hike about 50 minutes uphill and then down a rock-strewn path to Petites Cayes where you’ll be rewarded with a stunning and almost deserted beach (bring water with you).  That was our favorite beach by far on the island.  (Yes, you can go topless here.)

In Grand Case, we ate at a couple of the lolos, where the locals grills along the beach.  For $5 or 5E (it’s 1 for 1 at most places here), you can have an amazing platter of ribs.  We preferred the ones at Au Coin des Amis to the much talked about Talk of the Town or Sky’s the Limit.  On the former, you could actually taste the rosemary and the ribs were tender and juicy.  Avoid the mac ‘n cheese wherever you go (Kraft but worse), and opt instead for the fried plaintains or some homemade potato salad.  It’d be nice if greens were an option, but the only  healthy alternative was a wilted looking salad.

Love that the cook is drinking a beer. Doesn’t get more authentic than this!

If you prefer fine dining, the options are plenty and pricey.  Lobster is outrageously expensive (and that seems to be the case in the Northeast as well these days).  I was worried that it would be overcooked and preferred to try the more traditional French fare.

After much debate, we settled on the noted Le Pressoir, which had some specials that set it apart from the rest.  It was OUTSTANDING!  The casual setting (we dined on the porch of the old house) belies the extraordinary service and unique food preparations.  We chose items from the specials, although I still regret not trying their escargot with blue cheese (maybe next time…).  Instead, the wahoo tartar, which had been caught only a few hours before, tempted us and rightfully so with the addition of fresh mango and a citrus-inflected aioli to spread on lightly grilled toast.  For our mains, we had a veal trilogy (trilogies appear to be quite popular on the island), which consisted of veal tartar (one of the best things I’ve ever tasted), veal loin and veal cheeks.  It was accompanied by some fresh veggies and a creamy mashed potato.  For the other main, we had the lamb tenderloin and added an ample piece of seared foie gras for 7E!  The chef made a foie gras sauce to accompany it, along with more fresh veggies and a potato hash that was filled with butter.  Recalling the meal, even now, makes my mouth water.  With drinks and no dessert (we weren’t tempted), it was 123E.  Not bad for such an excellent meal.

You’ll have to settle for a pic of the porch. The food photos were too dark.

You can grab drinks when you’re done at the nearby Calmos Cafe where there is live music on Thursdays (pop) and Sundays (reggae).

While we loved the little scene in Grand Case, our stay at Les Balcons d’Oyster Pond was more romantic.  Overlooking the marina from our terrace, we easily enjoyed a simple breakfasted prepared in our room. 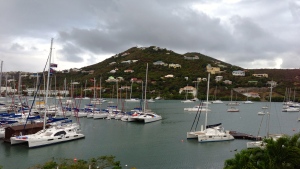 View from our terrace.  The skies cleared right after this photo was taken.

You can also take a short stroll from there to Quai Ouest (no website), a small, open air restaurant with inexpensive and well-prepared French food just off the dock.  There’s a menu and tons of specials.  Portions are large so be mindful of that when ordering.  We preferred the charm of this little place to the over-presentation of the more expensive meal at Big Fish just across the pond on the Dutch side.  They attempted to be elegant with an all white decor — lovely even if it reminded me of the sceney places in the Hamptons.  The spicy escargot starter had a lot of flavor but it drowned the escargot.  My “Big Fish” aka kingfish in a curry sauce was tasty but nothing special considering the price.  Or maybe I was put off by the fact that everyone nearby seemed to be from New Jersey.

And I didn’t feel the need to be reminded of where in high school I began the very prolonged process of attempting to be certified in scuba.  Fortunately after overcoming the only thing I recall fearing (hearing myself breathe underwater creeps me out), I finally managed to complete my open water certification with Octopus Diving!  A swell had come in the week before our trip, forcing them to cancel dives for about a week.  Fortunately, they were able to return to the water the day before our scheduled dives, and we were lucky enough to swim with a sea turtle and catch a glimpse of a moray eel hiding between some rocks, in addition to the many beautiful fish that make the thriving reef their home.  Sadly, there are no pictures, but I just received my PADI card in the mail last week.  Congrats to me!

While searching for a little something to nosh on before our 8am dive, we noticed that it’s not always easy to find a simple or cheap breakfast.  Consider purchasing some cheese, cured meats and a warm baguette from the Simply Market near Grand Case to start your morning or even take to one of the many beaches on the island.  You can also pick up wine or rum there.  It was much cheaper than the similar market on the Dutch side.

The market cheese plate – what a bargain!

Of course, you must visit at least one place on the Dutch side because no trip to this island would be complete without watching the low-flying planes from the famous Sunset Bar & Grill.  The atmosphere is nothing to write home about (90’s club music, overpriced drinks and food), but it’s still a must to watch people being blown into the water from the jet stream of a plane taking off at the nearby airport.  And sunsets are actually much better on this part of the island.

The reason why the Sunset Bar is known around the world.

If you’re looking for a quieter way to spend a day, take the ferry either from SXM or Marigot ($16RT) to Anguilla.  It’s easy to get there and a very different pace from St. Martin.  Although some people are up in arms over the recent opening of Freedom Rentals, an ATV shop a few feet from the ferry terminal, we decided that it was a nice alternative to renting a car or taking a taxi to get to the beaches. As it turns out, it’s a locally owned business, and I always like to support the locals.  You’ll need some way to get to the stunning, white sandy beaches that are on the other side of this quiet island.  Unlike St. Martin, you’ll be able to take a nice, long walk, particularly around Shoal Bay.  However, Anguilla seems to be more expensive than St. Martin, but US dollars are widely accepted.  If renting a car or ATV, make sure to remember that you drive on the left side here.

Tips: Renting a car is a must on St. Martin.  It’s the only way to explore the more secluded beaches, and it’s about $30/day, while a taxi from the airport will cost you the same.  Sixt just opened and offered some great deals.  Note that many of the gas stations are cash only, as are a ton of the bars and lolos.  Bring plenty of cash with you.

Sunset. No filter.
Made it to see and smell the #corpseflower that bloomed @nashvillezoo
If it’s too hot and your #homegrown #tomatoes won’t turn red - make #friedgreentomatoes easily! Pick a big unripe but firm green one. Soak in your #sourdoughstarterdiscard or #buttermilk for a couple hours with some cayenne or old bay added. Then dredge in cornmeal and fry in canola/veg oil for 4-5 mins if fully covered or 3 on each side if not. Cook outside on a grill burner if you want to keep the cleanup and smell out of the house. Top with #pimentocheese or #oldbayremoulade - Enjoy! #cookinginthepandemic
Finally enjoying all of Kyle’s hard work in the garden! #homegrown #corn #butterbeans #peppers and #tomatoes with #shortribs from @barebonesbutcher plus #allthecucumbers
Growing some #organicmushrooms @backtotheroots_official take 2 worked!
#risibisi with #peas fresh from the garden! #grownfromseed
Loading Comments...
Comment
×
%d bloggers like this: